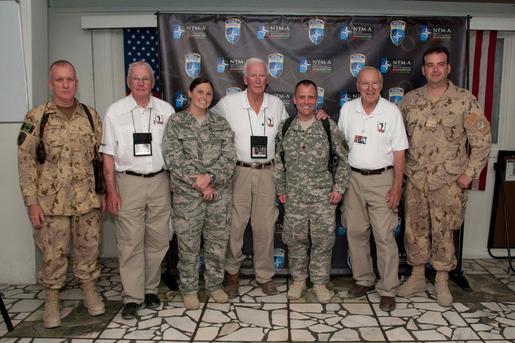 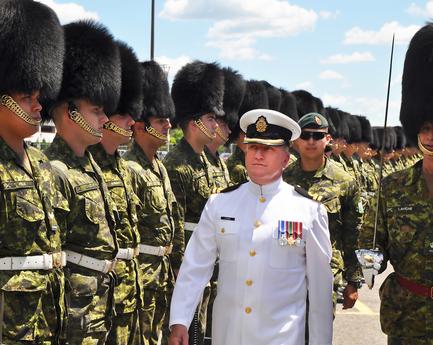 While attached to the Ceremonial Guard of the Canadian Armed Forces in 2014 and in the aftermath of the 22 October shooting of Corporal Cirillo, Lieutenant (Navy) Lewis demonstrated outstanding professionalism and dedication to Public Affairs excellence. He expertly utilized social media and available technology, and dedicated many additional hours providing constant and positive engagement with traditional media outlets. Lieutenant (Navy) Lewis’ efforts elevated the profile of the Ceremonial Guard in the execution of public duties and in so doing, he has brought great credit to himself and the Canadian Army.
Lieutenant-General J.M.M. Hainse

Lt(N) David Lewis was the PAO for the Ceremonial Guard/National Sentry Program for the 2014 and the 2015 season. He is intimately familiar with the organization, the mission, the staff and the importance of the National Sentry Program to the senior leadership. He was instrumental in getting the right message, under the right conditions communicated. He provided valuable and sound advice to both Cpls Stevenson and Button - both members who were on the site at the time of the shooting - to deal with the constant requests for interviews; he was key in counselling Cpl Stevenson in preparing a media statement that was very well received; and he worked to prioritize the multiple requests for information and interviews into manageable and predictable outcomes for myself and other that faced the media. As a very good photographer, he supported the PA plan by taking excellent imagery which allowed us to provide updates on social media which reduced some of the requests for information but also raised the level of awareness of the CAF, CG, and NSP and what it represents to soldiers and Canadians. His contribution was instrumental in getting the organization and the soldiers through this difficult period. The soldiers were complimentary of his efforts - it's not often soldiers praise PAOs for their work!
Major M. Lavigne,

​SLt Lewis is creative and keen to promote change, constantly looking ahead for new and unique ways to advance the mission. He has effortlessly functioned within the demands of the operational environment and has produced a body of work that is fully in line with the expectations of a three-star HQ. His leadership abilities are excellent, as his management of a multi-service, multi-national team aptly demonstrates. His planning and organizational skills were equally outstanding. This is evidenced by his ability to maintain perpetual situational awareness of his products while their impact grew significantly. His program grew in effectiveness and size, a testament to not only his planning skills, but also his administration. SLt Lewis was able to balance his own secondary duties as well as those of his staff's while conducting an aggressive program. He is expected to rapidly become a SME in his field.
Lieutenant Colonel T. M. Stauffer

Lt(N) David Lewis is a consummate professional and skilled public affairs officer. While serving together in the NATO Training Mission- Afghanistan public affairs office, I had the opportunity to observe his remarkable intellect and strategic accumen. I was responsible for managing a group of photo and video journalists and David's team was responsible for the distribution of their content through social media and other means. His ingenuity and creative marketing of these stories and videos greatly expanded the reach of our commands message. David ran a tightly organized shop that anticipated media trends and helped us select content that would have tehe best chance of being widely distributed. His planning skills and vast operational experience made him an invaluable asset. David Lewis has my highest recommendation.
Lt(N) Aaron Kakiel

SLt Lewis' performance during deployment was assessed as mastered. He constantly sought new places to expand his program and his outstanding initiative was mirrored by his excellent judgement. His verbal skills were excellent, as evidenced by his ability to relay complex instructions to a diverse staff. He marshalled the minimal resources available very effectively while holding himself to the highest level of accountability and reliability to all statements made on behalf of NTM-A. His ethics and values were of the highest standard, leading his staff by example. He was also very quick to ensure that his team as a whole, received the plaudits for their work. SLt Lewis conducted himself in a manner that set an example for others and presented himself as an officer who expected the highest quality of work. He was an important asset to NTM-A Public Affairs, marked by skill, innovation, dedication and meritorious achievement.
Major E. J. H. Stewart

I would like to express my appreciation to SLt Lewis' for his exceptional efforts during Operation LUSTRE. This operation was of immense importance to the people of Manitoba and SLt Lewis played a key staff role in his capacity as Public Affairs Officer for the Maritime Component Commander. Specifically, and at extreme short notice, he joined the MCC and immediately developed a public affairs plan and proactively engaged with local, regional and national media to ensure that the contributions of our sailors was captured and reported to Canadians across the country. He also worked tirelessly to ensure proactive internal CF messaging and produced several well-crafted articles for MAPLE LEAF and LOOKOUT. Throughout, he demonstrated stellar professional attributes and contributed significantly to the positive media coverage received during OP LUSTRE.
Captain (Navy) P. V. Dempsey

LCdr Lewis provides constant oversight and close supervision while giving enough flexibility for creativity. He has communicated across NRDs in a clear way to timely meet goals as demonstrated with RCN branding. Supports the transformation and provides guidance to ensure success by providing quality and adjusted PA products. Was capable of planning and developing innovative solutions with complex projects such as the window wraps and Social Media Strategy. He continues to offer original and strong guidance for communication issues. The quality of his work reflects his dedication and professionalism.
Commander Jeff Dargavel
Chief of Staff
Naval Reserve of Canada

Lt(N) David Lewis is an innovator in his field; pushes and develops new media products to disseminate the strategic message of the RCN. Easily engages with local and national media agencies; raising the profile of the RCN across all media platforms. He understands the strategic and political importance of his trade; able to quickly and accurately identify key messaging and articulate that message to the public.

Lt(N) David Lewis is an effective Public Affairs Officer whose worth is manifest through his optimized range of skills that include photography and social media management. His understanding of the National Capital Regions political dimension is operationally valuable to high-profile tasking's in support of the National Sentry Program. He is recommended for promotion, advanced training and operational deployment in a PA role.
Commander Dan Manu-Popa

David is a talented writer who can get to the heart of a story in an interesting and thought-provoking way. Able to meet tight deadlines, highly cooperative and receptive, David has the experience and enthusiasm to provide solid public affairs support to any organization.
Diane Blakeley

Lt(N) Lewis' strong leadership and work ethic foster a positive work environment while generating an exceptional high standard of deliverables. He displays exceptional communication skills as he effortlessly liases with media and routinely provides effective and professional interviews, written statments and photos for outreach events in order to increase the visibility of the unit and the navy. Lt(N) Lewis' dedication is beyond reproach as he continually strives to meet the Navy's mission of connecting with Canadians.
Commander J. I. Findlater